About The Introduction Story

When the Basic Fantasy RPG Core Rules were first being developed, I wrote a short bit of story featuring a group of adventurers in a dungeon, which in turn became the Olde Island Fortress, presently found in adventure module BF1 Morgansfort. The characters in the story were the four "iconic" characters, the same four depicted by the artwork of Steve Zieser in the rulebook. The adventure module also includes them among the pregenerated characters provided in the back.

I broke the "intro story" up into sections relevant to different parts of the rulebook. For those who would like to read the whole story as a single unit, I have compiled it together and posted it below. I have also included Steve's artwork, both as decoration and illustration for the story. So, read on! 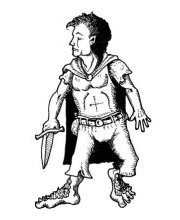 It was our third foray into the dungeons beneath the ancient fortress in the middle of the river. We were on the second level down from the ruins, standing before the great bronze doors beyond which we believed lay the tomb of an ancient barbarian chieftain. I hadn't believed the tales of the old drunk at the tavern back at Morgansfort, but for some reason Apoqulis the Cleric believed him. Turned out his stories were true... mostly, anyway.

I held a torch for Barthal the Thief as he tried briefly to pick the lock. He turned around and said, "It must be held by magic. The lock won't even wiggle." 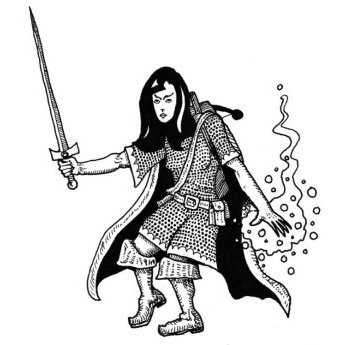 Morningstar the Elf smiled. "I have just the thing," she said, drawing from her backpack the scroll we took from the goblins. She unrolled it and began to read, and though I couldn't understand her words I could see the characters burning away as she read them, little wisps of smoke as from a candle rising up from them. Seeing that she was nearly through, I turned my attention to the lock. I'm not sure what I was expecting, but the little puff of dust that came from it as she finished didn't seem like much. She turned to Barthal and said, "Try again."

I'm tempted to say that Barthal bent to his work, but he's a Halfling; at just over three feet tall he could look straight into the lock without stooping a bit. I must have looked impatient, as Apoqulis leaned over to me and said "Be still, Darion, he'll be through in a moment or two."

Then I heard a loud click, and Barthal turned to me with a smile. "It's open, my friend. After you!" I handed him the torch, then stepped to the doors, sword drawn, and Morningstar joined me, likewise ready. I steeled myself and opened the doors...

Beyond lay a stone sarcophagus, resting atop a raised platform. Strewn about the floor were many human skeletons. Apoqulis made a sign with his hand that I didn't recognize; then we walked in carefully, trying not to trip over the bones. I noticed among the bones several bronze swords, covered in verdigris. I stepped to the sarcophagus. "The lid is likely very heavy, " I said. "Come, Morningstar, rather than lift it, let's turn it about so we can see what treasures lay inside."

Morningstar called "Wait!" but it was too late... I had already laid hands upon the sarcophagus. The bones on the floor began to rattle, then rose up and assembled themselves in a mockery of life. Without delay they picked up their swords from the floor and began to attack us. I would have to wait until later to kick myself, I mused, as I put my back against the sarcophagus and began to fight the monsters...

I raised my shield to fend off one of the monsters, and hewed at another with my sword, but I missed my first swing. Morningstar swung at one of the monsters and struck it, but her sword did the bony thing little harm. I saw that Apoqulis still stood by the door; of Barthal there was no sign. Fortunately, Apoqulis also had a torch.

Apoqulis raised his holy symbol and called in a loud voice, "In the name of Tah, begone!" To my surprise, several of the monsters turned as if afraid and ran out the door, disappearing into the gloom. Unfortunately this left quite a few of them still in the room.

Even as I saw all this I continued to hack at the monsters. It took two good blows to down the first one; it appeared that Morningstar was having similar trouble with the monsters. Then one of the skeletons hit her, just a minor wound, but still I felt good that I had invested my part of the proceeds of our last excursion in a suit of plate mail armor; I was shrugging off blows that would have harmed me were I still wearing chain mail.

To my surprise, I saw Apoqulis down one of the monsters in a single blow, then do the same to another in his very next strike. His mace seemed to be much more effective against the monsters than our swords. As I finally managed to down a second skeleton, I heard a high-pitched yell... it was Barthal, a little ways down the hallway, and he was throwing something.

There was a sound of glass breaking, and I felt a splash of water on my face. Several of the skeletons began to smoke, and then one of them fell in a heap. Holy water, I decided, but I didn't have time to think about it. I just kept hacking at the skeletons.

By the time they were all gone, I had taken a wound, and Morningstar had taken a second. We had one potion of healing left of those that Apoqulis' temple had given us; Morningstar told me to drink it, but I could tell she was in worse shape than I, so I insisted she take it.

Then we turned back to the sarcophagus...

"Your idea was good, Darion," said Morningstar after we had turned the sarcophagus lid halfway around. "You just got in a bit of a hurry to implement it."

"Indeed," I said, feeling foolish. I looked into the sarcophagus; laying atop the mummified remains inside I saw a sword, held in both bony hands with the point toward the corpse's feet. The golden blade was untarnished; the huge ruby set into the crossguard shone in the torchlight.

I didn't reach for it, though I found myself sorely tempted. "Barthal," I said, "tell me, is it safe to reach within?" The Halfling climbed up onto the edge of the platform and leaned over the sarcophagus, peering around within.

"I don't see a trap," he remarked after careful study. "Do you think the dead one, there, will rise up if you touch his sword?"

"He might," answered Apoqulis, "but I doubt it. The skeletons were likely the only guardians in this tomb."

All eyes seemed to be on me. Reluctantly I reached within, grasping the sword by the blade with my mailed glove so as to avoid touching the corpse. The long-dead chieftain didn't want to part with his weapon, but after a bit of twisting I worked it loose.

Shaking bits of dessicated flesh from the hilt, I grasped the weapon properly and held it aloft. It felt good in my hand... I wondered what magic it might contain?

Barthal's voice shook me out of my contemplation. "Look here!" he said, and I looked down. He had opened a secret panel in the platform... and as I looked on, gold and silver coins began to spill out. Barthal cried out gleefully, "Jackpot!"

We had the foresight to bring several large sacks with us, and we swiftly filled them with coins and gems from beneath the sarcophagus. Without further delay we moved out, intent upon reaching the stairs to the surface and then returning to Morgansfort. But it couldn't be that easy...

On the way in, Barthal scouted ahead and we took our time, constantly on the lookout for monsters. On the way out, we threw caution to the wind, moving at full speed with Barthal watching behind us. So it was that Morningstar and I turned a corner and practically stepped on the first rank of a goblin patrol!

Once again I was caught flatfooted, but so were the goblins. Morningstar reacted more swiftly, striking down the first of the little monsters. You might think that parley would have been a better idea, but we had already tried that with these goblins without success... so I couldn't blame the Elf for striking first and asking questions later.

I raised the golden sword and waded into battle...

• Basic Fantasy Role-Playing Game is distributed under the terms of the Open Game License version 1.0a • • Site Design and Contents Copyright © 2006-2017 Chris Gonnerman • • Artwork is property of the individual contributors. • • All Rights Reserved. •