chiisu81 wrote: ↑Tue Aug 27, 2019 1:28 pm If it's artwork Solo (or I) specifically requested for a certain document, post it in the document's Workshop thread. The Art Request thread is ok to put them in as well, but for me (and maybe also Solo) it's best to put in the document's Workshop thread to help us keep track (if doing the latter, you'd still want to make a post in the Art Request thread that you're working on or have completed something, and can put in a link as well).

For the Field Guides, you can post art in its Workshop thread, since it's relevant and likely to be used in that document. For anything else, that's what your Artwork thread is for.

Thanks, that helps a bunch!
Teaman is the sole proprietor of Sharp Mountain Games at roll20 and DTRPG

I'd have gone with Dantaeons, just for proper vowel ordering.

I went with Danteaons, as a play off of "Dante". But go with whatever you and Solo prefer. It's your rodeo.
Teaman is the sole proprietor of Sharp Mountain Games at roll20 and DTRPG

I asked bc I saw both spellings in the PDF, but re-checking your post I think I just mis-pasted

I'll fix for next release.

Thanks as always for the hard work!
Teaman is the sole proprietor of Sharp Mountain Games at roll20 and DTRPG

Another entry for your consideration (a high resolution image is in the Projects folder under my name.) 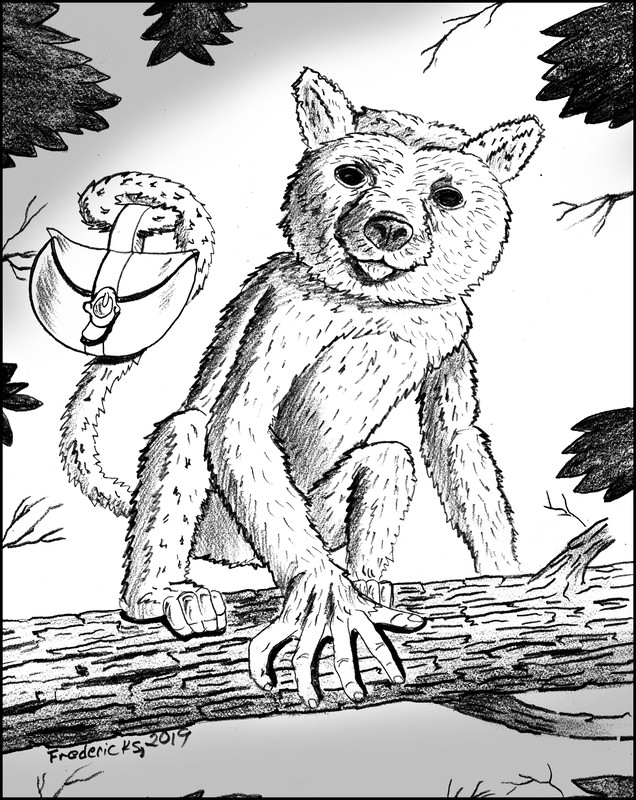 Monkeybears are primates with bearlike faces. They stand about three feet tall, and their fur ranges from light ochre to deep brown. Though small, they are quite muscular and can grab onto and hold items very tightly. They live in many forest and jungle environments and hunt in a pack. The make large nests in high trees. These nests generally contain a small trove of coins and other items that were stolen over the years. They are quite intelligent and many learn a few words of the common language through observation of the intelligent races. Their favorite phrases are "Mine now", "But so hungry", and "Have pity, starving".

In combat, their main goal is to steal opponents' packs and weapons. To make a grab attack, they make a single melee attack that round. If successful, they have grabbed the item in their strong arms. An opponent is allowed a saving throw versus Death Ray to try to keep the item. If cornered, monkeybears will fight using their claws and teeth, though they will attempt to flee at the first opportunity.
Teaman is the sole proprietor of Sharp Mountain Games at roll20 and DTRPG

Another great entry, thank you John

And, great artwork as always! I do notice towards the top left and bottom right it gets darker; was this scanned in?
Style Guide | Adventure & Supplement Templates | Monster Index
Top

And, great artwork as always! I do notice towards the top left and bottom right it gets darker; was this scanned in?

Thanks for the good words, Chii. I scanned the pencil work, then added a little digital shading at the top left and bottom right to try to bring the center of interest to the creature.

Will that cause an issue with the final document? Hope not.
Teaman is the sole proprietor of Sharp Mountain Games at roll20 and DTRPG