FG2 has Tyrranobeak (essentially T-Rex sized prehistoric flightless bird of the Axebeak variety ie Phorusrhacidae‎)
Is it really the end, not some crazy dream?

Sounds familiar to me too...
My personal site: www.gonnerman.org
Top

Thanks SmootRK. I'll take a look. I love the name!
Teaman is the sole proprietor of Sharp Mountain Games at roll20 and DTRPG

Thanks, wonder if we can track this booger down. Tyrranobeak is the upsized cousin!
Teaman is the sole proprietor of Sharp Mountain Games at roll20 and DTRPG

Also humbly submitted for consideration. Edit as necessary or desired.

Danteaons are a humanoid species with a devilish appearance. They have a similar build to humans, and when cloaked can pass as a human. However they have slightly reddish skin tones, horns on their heads, and a 4'-5' long tail. This tail can be used as a whip or to pick up small objects. They live about 120 years.

Their origin is clouded in mystery. It is said that in the most ancient of days infernals physically roamed the earth tempting mortals. Some legends claim that danteaons carry that infernal heritage in their blood. These stories, along with danteaon appearance, can make interactions with other races difficult. Many fear them, seeing them as monsters. Some danteaons reject the ancient stories and try to live peacefully among humans. They can be found in large cities with diverse populations. Others embrace their possible heritage and work as thieves and mercenaries for even the worst villains. They sometimes live near dark ruins, protecting the sites from plunder.

In combat, danteaons often use a trident to enhance their devilish reputation. They will use their tail as a weapon whenever they are engaged in melee combat. Their skin provides protection against heat, and they take 1/2 damage from fire-based attacks. If the attack permits a saving throw, and they are successful, they take only 1/4 damage. In any group of 6-10 danteaons, one will be a 3rd-level Magic-User or a 3rd-level Cleric. 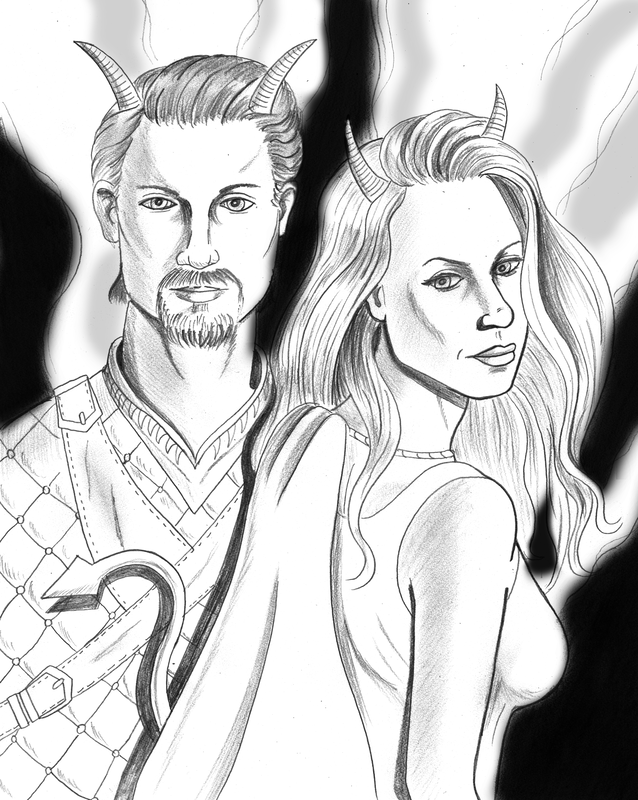 And great artwork as always! Since they are not "full" Infernals I presume they should be listed/categorized under their own name (asking Teaman and others as well)?
BFRPG - Style Guide | Adventure & Supplement Templates | Monster Index
Top

And great artwork as always! Since they are not "full" Infernals I presume they should be listed/categorized under their own name (asking Teaman and others as well)?

I thought of calling them Infernal, Descendents but wanted to leave their exact origin open to the DM's interpretations. I named them Danteaons, referencing Dante's Inferno.

Perhaps they are simply natural beings and legends of a bad origin grew up to explain their frightening appearance. There was a neat episode of the Star Trek Animated that took this theme, The Magics of Megas Tu.

Or maybe they've got Bad Blood worse than a Taylor Swift song. You make the call!

And thanks for the kind words Chii.
Teaman is the sole proprietor of Sharp Mountain Games at roll20 and DTRPG

r10 uploaded, adding teaman's Danteons, as well as zaozabob's infected; like most they still need stats and text, we're still in the super-early stages.

chiisu81 wrote: ↑Tue Aug 27, 2019 7:55 am r10 uploaded, adding teaman's Danteons, as well as zaozabob's infected; like most they still need stats and text, we're still in the super-early stages.

Thanks Chii, I love seeing them in print.

Also, when I post art, should I put it here (or under the appropriate project), under Art Requests, or under my own page. I'm not sure what works best for you and Solo.
Teaman is the sole proprietor of Sharp Mountain Games at roll20 and DTRPG

If it's artwork Solo (or I) specifically requested for a certain document, post it in the document's Workshop thread. The Art Request thread is ok to put them in as well, but for me (and maybe also Solo) it's best to put in the document's Workshop thread to help us keep track (if doing the latter, you'd still want to make a post in the Art Request thread that you're working on or have completed something, and can put in a link as well).

For the Field Guides, you can post art in its Workshop thread, since it's relevant and likely to be used in that document. For anything else, that's what your Artwork thread is for.
BFRPG - Style Guide | Adventure & Supplement Templates | Monster Index
Top
Post Reply
357 posts