Maroo, Priestess of the Mystic Oasis

Gear - carries nothing herself. All her gear is carried by a 3rd level human fighter called Nooba, who is a slave. Info on him to follow... 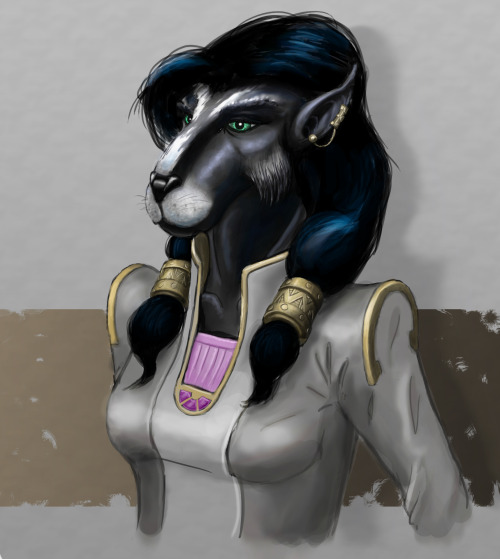 Saracen Fhajah - needs to be levelled up to 5

AC with shield, 18 (currently with no armor)

Fhajah (known to most simply as saracen) was the son of a moderately wealthy merchant and a retired mercenary in southern arabia, he grew up in relative luxury and eventually was trusted to captain one of his fathers ships, sailing to china in search of silk. Unfortunately Fhajah was a terrible trader and left china destitute and with half its original crew. In another stroke of bad luck the ship was set upon by pirates on its way home, and faced with death, Fhajah choose, unwillingly, to become a pirate. Fortunately Fhajah was a much better pirate than he was a merchant and within a year he had amassed a decent fortune in gold and reputation to accompany it, buying his freedom from his first captain and setting out to the seas to enjoy a life of piracy and adventure. His latest prize however has turned out to be perhaps more trouble than its worth.

Character description:
Short for a human, tall for a sea elf Fhajah has a dark and greeny blue complexion with brightly coloured tattoos running down his right arm, displaying dragons and ships and other fantastical creatures with the shoulder featuring a large tattoo, all in blacks and dark greens, of a skull with a snake coiling theough the eye sockets.
One eye is concealed by a black eyepatch, and a vertical scar runs down his face from just above the eye to the bottom of his jaw.
He is dressed in colourfull silks of red yellow and black with a long flowing blue cape and a deep blue sash with a scimitar slung at the hip. He wears a tricorn on his head with a long white feather sticking out at a jaunty angle.
Those who look closely, past the bright silks and decorations, will see that concealed behind them is a tarnished, dented and scratched suit of armour heavily used but in good condition. Slung on his back is a rifle with a silk sash knotted to the ends, notches line one side with the other being taken up by many detailed carvings of waves and bones.
Perched on his shoulder is a golden eagle(familiar) that he bought with money meant for silk when "trading" in china. Fhajah calls it Altair.

Standard spell revision:
2 magic missiles
Read magic
Charm person
Invisibility and Phantasmal force x2
Last edited by SerGavin on Tue Aug 09, 2016 5:41 am, edited 21 times in total.
"If I have seen further it is by standing on the shoulders of Giants."
Top Elias ben Yechezkel, the wandering priest. Though he does not speak often of his past, it does not reflect the time he spends thinking of it. His father, Yechezkel, was an accomplished warrior in his time. After years of fighting off foreign invaders, he retired to a quiet Kappen village in northern China as the head of the night's watch where he could raise his growing family in peace.

In his early days, Elias spent his time coasting from shop to shop, village to village. If there were a master to learn from and a craft to master Elias was sure to make apprentice, for a time. Each month he would discover his life's new purpose, and each month he would leave as dissatisfied as he came.

One night, as he was stocking shipments of leather for the local cobbler, he heard a loud tang ring across the city. It was the town bell, and with it came a band of petty thieves which had been tearing their way throughout the region.

The bandits took that they could carry, and burned what they could not. Looking out a red shine shimmered across Elias's black reptilian eyes, as the wooden homes of all he knew collapsed around him.

A bandit from the other side of the village ran past Elias shouting at her companions, "Huo Zei is dead, take what you can and run!" After they had scattered Elias made his way back to the remains of his ashen home. He entered to see a bandit, well adorned with golds and silvers, crushed beneath the weight of his father's great mace, "Jichu". A top Jichu leaned his father, who then collapsed upon the floor.

After months of rebuilding the village, Elias decided that whatever life would have for him, he would not find it here. Taking his father's mace, he said his goodbyes to his mother and siblings and left to discover what he should make of himself.

Years passed as he made his way through China, picking up whatever work he could find. Despite whatever initial gratification his work might have him, he could not sit well with the thought, "This is what I shall do, for now, and evermore".

As he was entering into the next leg of his travels a blind Siamese man approached him. "You, my son, what is it you desire?"

"I wish to learn a great craft," Elias replied, shook by the bums audacity.

"No, you have learned many great crafts. Why not go back? Fix shoes, cure steel, make wine - all these things you know."

"None of those did well for me."

"..and they never will be." The man placed an iron weight into Elias's hands. "Take this to the home of Edia Ephan, she will teach you what you wish to know." The blind man pointed Elias in the direction he should go, and then allowed him to continue on alone.

After a week of travel, Elias found himself in the home of Edia Ephan, a priestess and aesthetic. For the next few months, Edia began teaching Elias the ways of an aesthetic life. After a year Elias was on the streets, healing the sick, and guiding the lost. A few years more and Elias left Edia to go on his own; this time knowing what it is he should do. Before he left Edia gave him a final gift, forged from the iron that the blind man had given him years ago, it was a hand, reaching out.

For the next few decades, Elias could be found wherever help was needed, all throughout China and South-East Asia, whether it was healing injured adventurers or casting protections on those in need, Elias's hands were always reaching out.

When the time came, he set out to find for himself an apprentice that he could teach all he had learned. After years of searching in China and Siam, he decided to expand his scope and set sail aboard the "Ark-ari" in search of a mind to shape as his own.

DM query - This is cool, I have added weapons and spells and a shield, but but I can't see how you got to 62 hit points as you had written. You have 7 for 1st level, and an additional max 7 for the other 5 levels would get you to 42 total. 62 is clearly wrong. I have decided you got the average for your other levels and your hit points are 32.
Top
Locked
5 posts • Page 1 of 1