This subforum is for discussion of the Iron Falcon Rules for Classic Fantasy Role-Playing. Maybe someday they'll have their own forum, but for now I'm keeping the discussion here.
Locked
203 posts

That's the kind of thing that usually bothers me, too. But this is just the first "cut" at it. Do you like the overall approach?
My personal site: www.gonnerman.org
Top

Yup. I like the old game - new game approach. People know what they're getting. They can't complain that they liked the way it was laid out in the original better.
I enjoy BFRPG dungeons. And played Will Thornton in Dirigible of Doom!
I PbP at Unseen Servant PbP Forums!
I Link at LinkedIn
Nobody ever catches Nuth.
Top

Do you plan to add the rules about aerial and seaborne combat at some point? Because I've always liked those, especially the former, but they've always seemed a little clumsy to me.

Oh, and a question - Did the level 22 limit come from the Greyhawk magic-user table? I have to admit I'm a bit obsessive about that part, I've never been happy with the original trailing off arbitrarily at different levels for different things. But are you tempted to add some level 8 cleric spells?

Vile wrote:Do you plan to add the rules about aerial and seaborne combat at some point? Because I've always liked those, especially the former, but they've always seemed a little clumsy to me.

Honestly, that will probably not make the 1st Edition print release.

I'd like to clone the whole thing, but my true internal goal is to run really Old School dungeon crawls. I don't need either airborne or naval combat to do that. But the first print edition will probably not be the last.


Vile wrote:Oh, and a question - Did the level 22 limit come from the Greyhawk magic-user table? I have to admit I'm a bit obsessive about that part, I've never been happy with the original trailing off arbitrarily at different levels for different things.

Yes, that's where it came from, and I never cared for the tables ending at different points either.


Vile wrote:But are you tempted to add some level 8 cleric spells?

No. There were no level 8 clerical spells, and adding substantially to these rules is out of the question. I already have to change more than I'd like as it is.

I'm a bit concerned about the level titles, actually. The prevailing theory is that, while individual words or numbers may not be copyrighted, a table of such in a specific order may be. Tweaking spell progressions is no big thing, and the XP progressions are already different (a result of applying consistent math to them) but level titles may be too close.

I don't think the idea of level titles is a problem, just the specific implementation. We've already changed the clerical table enough that I'm comfortable with it as is. Should the other three be changed also?
My personal site: www.gonnerman.org
Top

How long away is it till printing would you say?
Top

black1blade wrote:How long away is it till printing would you say?

If the game was 95% done (and it's NOT), and I said it would be good in a week or so, it might take two or three months to hammer out the last bit.

But right now I don't even know how much more work there is to do. First, I have to get through this phase of filling in blanks. This is the second phase, as the first was laying out structure. The third phase is reviewing the research: Going over the original material and FAQs and Q&As and making sure that everything that is relevant is either replicated or accounted for. When the third phase is done, the game is as "complete" as it will get for this edition. The fourth phase is proofing and finishing; that phase will probably take a minimum of a week and could take as much as two months, though with the offers of assistance I've received I'm guessing on the shorter side.

In long words, I don't know when it will be in print. My best guess is this year.
My personal site: www.gonnerman.org
Top

Okay cool good to know. First time I've been able to find the weapon tables (how different weapons are better or worse against different armour) in a rules set

Iron Falcon Rules Release 19 -- February 27, 2015
This release includes a bunch of changes: Some minor enhancements to the NPC Parties section; Descriptive text for some monsters including several of the humanoids as well as Skeletons and Zombies; a small blurb about poison in the combat rules; and a random thing here and there. More commentary credits have been added also.

And on another note, Alexander Cook sent me a cell phone pic of the new cover art he did for Iron Falcon. I worked it over a bit and mocked up the cover. The final version may differ a bit; he's sending me the original to scan, and after I have a good-quality image I'll build the final cover and show you all. 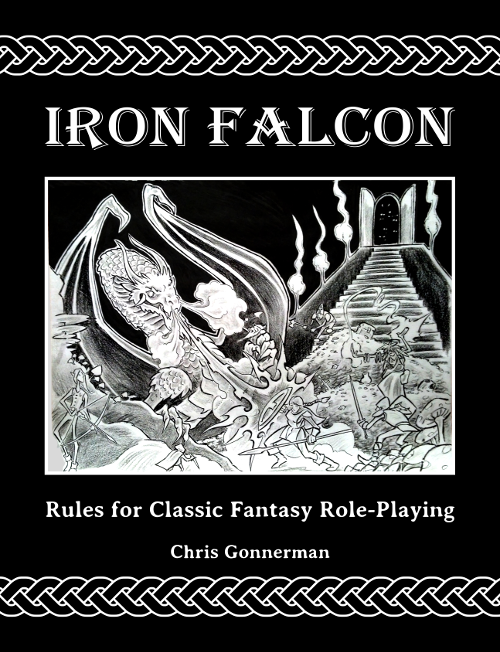 That looks awesome!!
The problem with doing something really stupid to impress people is that they may just be impressed by how stupid you really are.
Top
Locked
203 posts