The Wheel of Fate is hosted and managed by the local trade merchant "Abe Meadows".This is a simple wheel with black and red squares on it with numbers on each square. Abe will spin the wheel and depending on what the bet is, the pay out changes. Pick one color (red or black) and the pay out is 1 to 1(you bet 1 gold and you win a gold). Pick a number and it is 5 to 1 (bet 1 gold and win 5 gold back). Only allowed to place one bet per spin.

by Metroknight
Children's games. No xp nor gold cost and no gold awards but the kids get a piece of hard candy or sweet meat roll usually if they do good. Could not find any medieval looking pics so this is the closest I could find. 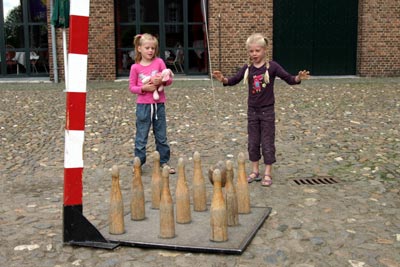