RED OAK: Beyond the Mirror

by Woe
Before the party goes much further, it's early September. You recommended ages ago, continuing through mid-October before moving away from the wilderness exploration. Correct? I'm asking because if it's only a month before they become citybound, I'll probably wait a bit before trying to build golems (etc). I think I have almost a month of food left, though I'm not sure whether I want to stay here for a month with so much to read and learn. It does sound like there's going to be some interesting activities to explore over the winter though!

Wow! That's pretty much what all of the party thinks. Lunchtime is over though. Tiana reluctantly puts away the notebooks. Maybe tonight, when the party rests.

Due to Kilian's insistence, Tiana will look at the maps and see if she can place the long hallway. There are a few to choose from on the maps, but not too many. Do any look feasible?

The NE door looks to open into another chamber. Let's start with that. I need to work out encumbrance for these new items. Can you let me know how much the two chests weigh, as well as the golems (for future use)?

by Longman
The hallway is pictured from a variety of angles. It has a large stone altar up one end, and various entrances off to either side. Tiana is not sure where it is exactly but it could be long halls on level 1 (western), level 2 (eastern central), 3a (eastern), or 3b (just to the north of you). Nothing on the other levels looks that likely.

I'll get to the encumbrance later. For the time being, the door does open as planned, with the key. I'm reverting to your regular marching order, unless you say otherwise.

The room is basically empty - scraps of debris in the corners - and looks totally disused. There are small patches of mold growing in a few spots and evidence of rats and small insects. It is quite cold and damp, and smells dank. There is no dust around. The room is almost the exact shape of the secret room, and there are doorways in the north walls. There are no doors in place. Tiana is almost certain now that these are the rooms at the bottom of level 3b on the maps.

Abigall notes that the secret door does not seem to radiate magic from the northern side. If you closed it, it would appear as stonework.

You are all through the doorway, trying to keep quiet. Freya is certain she can hear a rumbling sound coming from somewhere...Anna still can't hear it and everyone else just hears a lot of echoes.

by Woe
I'm not sure, should they spike the secret door open, or are they confident they'll be able to find+open it again?

Standard marching order for sure. It's in OOC in case you need it.

The party will head toward both the hallway just north of us, though they're also interested in the NE room with the interesting drawings. They will try the long northern passage (on the right, not the shorter one on the left).

Freya attempts to place the rumbling. Is it a waterfall, a mechanical sound like a waterwheel, mine carts, anything like that?

by Longman
The door poses something of a problem. To begin with, it looks like when the door closes, it is going to look so much like a real part of a wall that you'd never know the difference. Secondly, there is no key-hole on this side.

Tiana suspects high magic is at play even though the mouse girl can't see it.

The problem is, spiking the door open will be pretty obvious to anything coming by. And it's pretty obvious that these secret doors have remained undetected and unopened for a very long time. There is no debris of insects or rats, or even mold, on the south side of them.

I'm calling the secret room 1, the room you are now in 2, and the room with what look like 2 'dais' structures in the corners, room 3. It seems like you are headed for room 3, but I need to know what you are doing about the secret door first.

by Woe
Does Tiana think her knock spell would be able t open the door if cast on it when closed?

by Longman
It's a good spell. It will probably work. She just doesn't know for sure.

by Woe
Okay, she will assume that it will work. If it doesn't later, they have a trusty pickaxe. After doublechecking they got everything they wanted, they will close the door Freya will try to subtly mark the floor near the area using the existing debris, then they will head north.

by Longman
'Click' goes the door. There is no sign of a door ever being here. It's the best secret door you have ever seen.

Moving up towards room 3 - the 'dais' room - Freya rounds the first corner and can see that none of the doors appear to be in place around here - just open doorways. The wood of them is completely gone, and so are the old hinges.

She takes a peek into the dais room and removes all doubt about the area you are in. The daises are indeed here, one in each corner of the western wall. They are about 4' high and it looks as though they once contained stone statues, but these have been cut off at the base, leaving only a stump.

Kilian notices a few dwarvish runes carved subtly into small places - probably the marks of ancient stone-workers,leaving their initials in their work.

The rumbling sound - Freya thinks she can hear it all around, it's very hard to make out what it is. She can see through the open doorway down towards the staircase, that it looks like large stone pillars reside their, probably for holding lamps.

She can also see a few signs of activity around - - not exactly footprints, but scuff marks on the floor. This place isn't deserted. Something moves in and around here. Talin can't see what she is talking about. (Tracking rolls much harder UG).

by Woe
Marching order:
Freya - 30' ahead? Bow.
Two dwarves, crossbow weapons (since it will take a round to catch up to Freya and they can draw the round they attack, why not?)
Talin, Anna and Fido, bows and slobber.
Tiana and Mousegirl with her sling

by Longman
I think you mean north into the long hall marked '5'.

All Freya can pick up is signs of movement through the dirt and debris. Nothing specific, but certainly nothing that indicates anything huge around here.

She arrives at the doorway to the long hall (5) and can see 60' down. That means she can see the open doorway off to the north, and that's all. The small door to her immediate north is also missing.

This hall does not contain any dwarven carvings, so far. It is quite plain. Lots of torch-holders, and some spots for lamps up in the ceilings as well. Lots of small debris in corners and crevices, including minor spider webs. The sound of scuttling as rats (?) move westward down the hall, away from you. There are a few minor areas of very aged stonework, looking a bit like so... 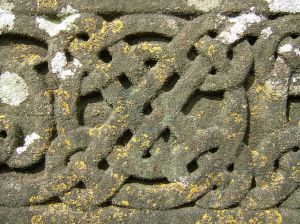 She's starting to think the rumbling sound might be because she hates being underground and the blood is roaring in her ears.