by Longman
Argh. The incredible switching castle! I have got this image really mixed up, sorry. Ignore the cardinal directions on the image map. Freya is approaching the keep tower from the west! The one with the small windows that she climbed last time. My bad.

Freya sneaks ahead and enters areas 17 and then 16. From here she can see that the main tower (13) is just a series of walls now, no floors, no roof. There used to be another building (14) on the other side but it has also collapsed long ago.

The west of the main tower (13) wall adjoins the smaller keep (11 and 12) that Freya climbed up before, from the other side.

The whole area around the base of the main tower (13, 14, 15, 16) looks pretty clear. She can see some signs of goblin activity in the courtyard (15, 16) like fires, places where wolves were chained up previously, etc) but nothing at all recent (2-3 weeks ago, or more?).

She does a notice a flight of stone steps from the centre of the old main tower area (13) that lead downwards to the north. These obviously lead to a cellar or underground area. She'd have to go down there to see more.

The old keep where her gump nemesis was (11 and 12) has 3 stories - ground looks OK, first floor she knows is in bad repair, 3rd floor is where the baby gump was.

Investigate ground flower of gump tower? Or go down below the main castle? Or sneak back?

Investigate the ground floor, with the others being close but not too close. As long as it's deemed safe, they'll go all the way up to the gump floor. Kilian will also be checking the stonework to make sure nobody is caught in a cave-in.

by Longman
Freya summons up the other two from the west side, and they move up to her position (16) without incident. Talin spots a dead goblin in area 15, that Freya missed.

The stonework of the smaller (gump) tower at 11 and 12 looks in decent condition. As you scan around it looks like the only building in the complex that still has floors.

Kilian thinks the ground level of the tower is OK, although there are no doors or windows, and it isn't weatherproof at all. As for the stairway leading downward from area 13...he isn't sure but thinks it's probably safe as well. 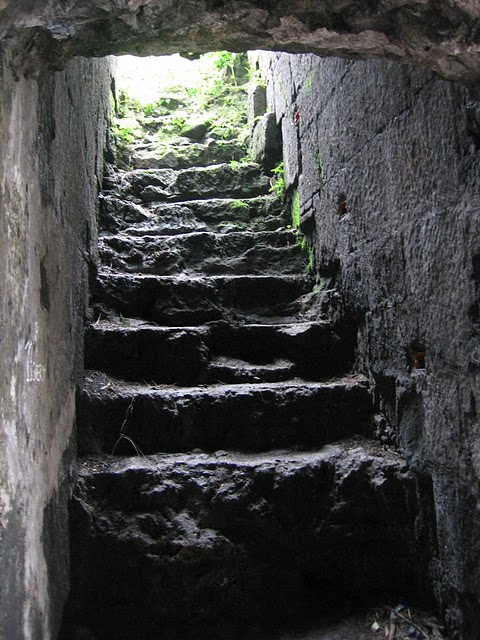 You enter the ground floor of Gump Tower and find a decent stone floor, and makeshift ladder leading to an open hole in the ceiling, the same sort Freya saw months ago, on the 2nd floor. This looks like goblin or humanoid work, not human. The floor above still has some stonework, and holes have been repaired with logs. (So has that of the 3rd floor, Freya knows).

The room contains a whole lot of building materials that someone thought to stash here a long time ago. Lots of logs and beams, some stone slabs, some bags of sand for making mortar, and so on. You'd have to move stuff to search properly.

There is a fungal smell coming from the floors above - recognizable as the smell of gump. Talin smells it first.

(Last time I ever try to use a damn aerial shot of an actual castle.)

by Woe
It's not just the aerial shots of the castle that have confused me. A lot of your maps don't have north at the top. I just figured it was an Aussie thing and got used to it.

Can Talin/others figure out how the goblin died?

Gump Tower goes first. Do the repairs look recent, or prior to the last visit? Any sounds coming from upstairs? If not, Freya will explore first but using the mirror to ensure nothing is up there.

by Longman
Hey, you being confused is fine. It's when I get confused, then I have a problem.

Anyway...the repairs look old - not nearly as old as the castle itself, but quite a long time, Kilian thinks 100 years, maybe more?

"Can't say fer sure. Dis all looks like a house o' cards to me," he says quietly to Talin. "A proper six hunnerd year-old building in Aarn, you'd be needing no more dan a lick of paint to make 'er right."

So...leaving the goblin til later, Freya starts climbing up into the 2nd floor area and...the response from up above is pretty rapid and she doesn't even make it to the 2nd floor. There is a creature moving on the 3rd floor. Gump is a likely guess. It's moving towards the ladder hole, to get from 3rd to 2nd floor.

Freya is inside the 1st floor, 5' up the makeshift ladder. The other 2 are in a doorway (with Fido), about 15 feet from her. Kilian has not heard the noise but Frey and Talin both have.

Your go. It'll probably take the creature 2 rounds to get down to where it can see into the 1st floor.

by Woe
Ya few questions.

I thought (but using phone so didn't check) that Freya threw down the ladder. Did she, and is it back up?
Is the route from 1>2 also a ladder or stairs?
If there are ladders, can a Mage hand move it away from the opening?
Can archers get a clean shot from the 2>1 route, and if so, all three?
Can the 2>1 route be blocked by a Mage hand waving a torch?

by Longman
all yer questions answered...

Tiana is with the other group. No mage hand round here...

Bruce, mouse girl, Jane, Anna and Tiana head one way up the valley to dog man hex. Abigall wasn't going anywhere without someone she could talk with.

Yes, Freya did bump the 2-3 ladder out of the way. But that was months ago. What she can see now is the 1-2 ladder. Which looks similar.

Yes, archers could position themselves so that as soon as anything climbs down or pokes it head through the hole between 2 and 1, you could all fire at it, from close range.

If it peeks down first and you are aiming at it, you might have to make a save vs paralysis to avoid looking at its eyes - and then, another save if you fail the first roll, to avoid being actually paralyzed.

But if it climbs down feet first, it's a fish in a barrel for 1 round.

Or, Freya could use the mirror and one of the others could fire backwards. That'd be a -4 penalty to hit. Still a strong possibility.

Last time, the baby gump poked its head down from level 2, and saw Freya. She nearly died. This creature sounds a bit bigger though.

by Woe
OMG! I didn't realize Tiana had departed with them!

The party will quickly leave the tower, doing what they can to knock down the 2>1 ladder.

by Longman
Yep, she did.

Freya can hear the creature climbing down ladder between 3 and 2. She knocks down the 2-1 ladder and runs for it.

(Level 2 was the room she saw before through the window, btw).

They all flee to about 30' feet of the door to the tower and take up vantage points in the entrance between area 16 and 17.

A horrible screaming noise starts up, the same as the one they heard a few months ago, coming from the top of the tower. But this time, it seems to be coming from the stairwell down to the underground level in area 13-14.

- Kilian critically fails his saving throw and instantly bolts like mad to get away (into area 17 and down the hill). He drops his crossbow in his haste.

- Talin also fails but can't move any closer to the sound of the sound, he is too unnerved.

- Freya fails too. Much like Talin, she is OK where she is, but cannot go any closer to are 13, or the tower.

You can't hear what is going on in the gump tower, the screaming noise is too loud and weird.

by Woe
Talin and Freya will pick up Kilian's crossbow then go after him. Once everyone calms down, they'll head up into the mountains where everyone else is.
All times are UTC-05:00
Page 3 of 44
Powered by phpBB® Forum Software © phpBB Limited
https://www.phpbb.com/