This forum is for requesting, submitting, and discussing artwork for the project.
Locked
40 posts

This female ogre pic looks more like a half ogre methinks: http://oversoul.artix.com/images/previe ... onPool.jpg

PS: It's pretty cheesecakey though I guess.
I enjoy BFRPG dungeons. And played Will Thornton in Dirigible of Doom!
I PbP at Unseen Servant PbP Forums!
I Link at LinkedIn
Nobody ever catches Nuth.
Top

I'm not sold I think someone so where could do better. Or maybe already has.
"If I have seen further it is by standing on the shoulders of Giants."
Top 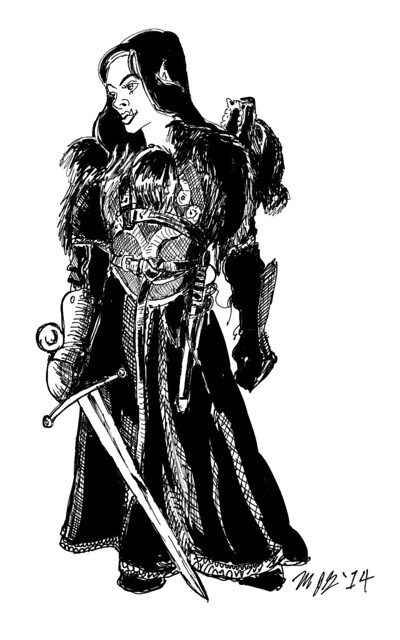 Challenge accepted!
From: http://sudsysutherland.deviantart.com/a ... -467848949
"Our featured protagonist here is a female half-ogre who isn't under the stereotypical trope we see so much of in the RPG world with half-ogres or strong women. While she is wearing a dress, she is also wearing very functional leather armor in this case; not some leather/tribal wannabe armor that is nothing but cheesecake swimwear. What is also painfully obvious is that she is unlikely to be 'stupid' either. One does not stand with this bearing being stupid in a medieval inspired world where a half-breed humanoid is likely to be an outcast. Clearly, the human capacity for developing intelligence has melded well with ogre raw cunning. Any insult to parentage is likely to result in sudden death, in a declared duel of honor with our heroine most likely taking the title and riches of the moron who insulted her."

Maybe not 'sexy' in supermodel manner, however it cannot be said she is not beautiful in her own way and in a manner most humans would find.
Michael "Sudsy" Sutherland

That is hot. I want to play as her!

... and THAT is the reaction I wanted to see!

--Ron--
I enjoy BFRPG dungeons. And played Will Thornton in Dirigible of Doom!
I PbP at Unseen Servant PbP Forums!
I Link at LinkedIn
Nobody ever catches Nuth.
Top

My take on the female half-ogre: Hanging around between adventures, perhaps excited and shy waiting for someone

Sorry for any misspelling or writing error, I am not a native English speaker
Drawing portfolio: https://www.instagram.com/m.serena_dimirag/
Top

Hey, I like both of them, but I have to admit that Sudsy drew what I was looking for... tough, even a bit scary, but still attractive in her way.

There are four "intro story" characters presented in the Core Rules, with drawings by Steve "Carjack" Zieser. In BF1 Morgansfort I present 8 pregenerated characters, four of whom are those intro story characters, Darion, Morningstar, Apoqulis, and Barthal. The other four have never been illustrated; they are:

So obviously, what I'd like to see is these guys. Individual or as a group, mugging for the camera or going about their daily dungeon grind, whatever you like.

There will, eventually, be a new release of BF1 Morgansfort with a few minor changes. Artwork submitted here will be considered for inclusion there. Obviously.
My personal site: www.gonnerman.org
Top --James
"Cthulhu called, he wants his insanity back."

"Vulnerable and hot trumps paranoid most of the time."
Top
Locked
40 posts