by chiisu81
Can you put a copy with the plain/original background in the Projects folder? I will compare the two and see which might work better, in the document.

chiisu81 wrote: ↑
Fri Oct 04, 2019 9:26 am
Can you put a copy with the plain/original background in the Projects folder? I will compare the two and see which might work better, in the document.

It's in there now. Luckily I still had the file with all the layers.

by teaman
Humbly submitted as always (the larger image file is in my dropbox folder, Chii and Solo) 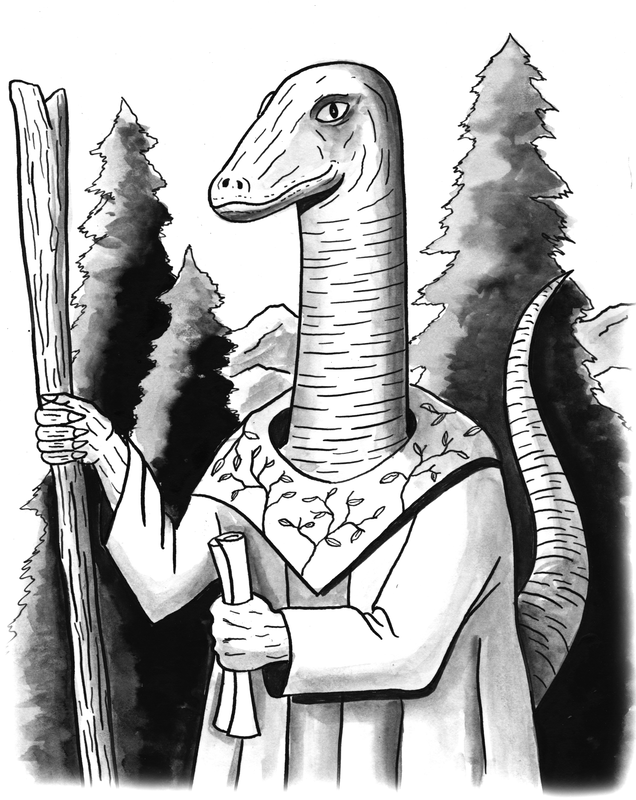 Apatosapiens are bipedal, intillegent dinosaurs, descended from the giant herbivores of long ago. They stand about 6 feet tall, though they can raise their head up 10 or 12 feet if necessary. Their upper limbs have evolved to resemble humans arms and hands, though their lower limbs are more like those of dinosaur. They speak the common tongue, their own language, and generally wear robes as their clothing.

Like many other species, apatosapiens survived extinction on islands and in other isolated environments. They evolved along with the other sentient species, though they have little contact with them. Some live in tribes and some in religious communities. They are excellent farmers and herbalists. Many spend their free time as scholars. They preserve their history in writing and in stone carvings. In tribal villages, there will always be a shaman with 1d4+1 levels of Clerical abilities. In their religious communities, all members will have 1d4+1 levels of Clerical abilities.

Apatosapiens are peaceful beings, but they will fight if threatened. They use large wooden staffs and have a vocalization defense. At the start of combat, all apatosapiens will chant in a long, low tone. Opponents of ogre size or smaller must make a saving throw vs. Paralysis or be immobilized for 1d6 rounds. The saving throw is only made once: successful characters are immune to the chant for the remainder of that combat. Apatosapiens may immobilize up to their own number of opponents. They do not kill immobilized opponents but may strip them of their weapons or restrain them with ropes.

by Jeff Wrbelis
Been away for a while but will start fleshing out a lot of the stats for some uglies for the book...some of this will need to be added to existing flavor text, like the Alley Gaunt's Grab ability...


Alley Gaunt
Armor Class:22
Hit Dice: 11**
No. of Attacks:3 (2 claws, one tail)
Damage:3d4/3d4/1d8 + grab (Alley Gaunts will attempt to grab small sized creatures they ambush,
overpowering such creatures with its prehensile tail on a str vs str test, at +5 for the Gaunt's
terrible strength)
Movement:60'(Climb at full speed with 90% success)
No. Appearing:1
Save As: Rogue: 11
Morale:9
Treasure Type:I
XP:1,670

Thanks for the good words, Al. I appreciate it and have a great day. You just made mine.

Tree drakes are serpentine relatives of true dragons that inhabit any terrain with thick vegetation. They are filled with low cunning, loving to toy with their prey in cat-and-mouse games when the beast has an advantage. Not overly bold, Tree Drakes will stalk a group of victims in order to evaluate their threat level before striking or moving on to easier prey. Their scales are bark-like and fluctuate to match existing terrain and often have real moss or underbrush gripped between scales by muscular contraction, making a Tree Drake 90% undetectable while motionless, and 65% when moving at 20' or less while stalking enemies.

While they possess no breath-weapon, their bite is highly poisonous. In melee combat, the drake will wrap itself around one victim within 5' on a hit roll of 7+, constricting for 2d4 damage plus an additional 2d4 per round thereafter. The hold may be broken on a roll of 1 on 1d10 (add the victim's Strength bonus to the range, so a Strength of 16 would result in a range of 1-3 on 1d10); breaking the hold takes a full round. Tree Drakes may constrict up to four man-sized or two large creatures, though only one new victim may be wrapped each round. Creatures that cannot be wrapped will be tail slapped if within 10' of the Drake and it has not constricted more than one foe.

Tree Drakes are very fond of witty speech and clever riddles, understanding and speaking most human, demi-human and humanoid languages and more than one would-be meal has escaped with such methods. Tree Drakes that have been bested but not killed will bargain with their well-hidden treasure if escape is impossible. If more than one Tree Drake is encountered, it will usually be a mated pair and several hatchlings. 10% of the time, however, it may be a Tree Drake mating-ball, full of adult individuals...and woe to those who fall into their notice at such times.

Dwarf Cyclops are smaller, more vile versions of true cyclops. Their namesake comes from their stunted, goat-like legs and general dwarf facial features...though the large and sharp horn that juts from their forehead puts the lie to any relation to true dwarves. They are often found as the muscle in a gang of Satyr Man-stalkers, and this has often led to them being mislabeled as giant Satyr.

Dwarf Cyclops will usually use a two-headed mace in combat to augment their gore and stomp attacks, though other weapons are not unheard of. Their lack of depth perception makes thrown and missile weapons a losing proposition (-2 to every range), but a desperate dwarf cyclops will use such if it is the only weapon available (or the foe is otherwise beyond range). These lumbering brutes will usually open combat with a thundering charge of their horns (double damage and usually charge modifiers). The deadliest trait of these giants, however, is the mesmerizing effect their single eye can have on anyone within 30' and gazing at the monster. Once every five rounds, the Dwarf Cyclops can attempt to blank the minds of any creature not immune to charm ; such victims must save vs spell or be struck dumb and unable to think for 1d4 rounds. The strength of this effect is very potent, and creatures so affected can be attacked, though a new save is allowed each round the victim is dealt any damage. Dwarf Cyclops are immune to this effect.

These monsters enjoy the flesh of all sentient prey, and a band that moves into an area inhabited by humans and demi-humans or other monstrous humanoids will never stop marauding, waylaying and devouring the inhabitants until the former inhabitants are completely decimated or the malicious giants are dealt with.

by teaman
Great work on all of these entries, Jeff!

by chiisu81
Good to see you back Jeff

Thanks for helping flesh out some of the entries! I can start working on the next release next week, feel free to keep updating here at your convenience.

Agreed with Al, teaman always comes up with such creative entries with great artwork to go along with it. The apatosaurus will also go into the next release.
All times are UTC-05:00
Page 11 of 20
Powered by phpBB® Forum Software © phpBB Limited
https://www.phpbb.com/