by SmootRK
Recently I had a little time and some pent up creativity (so it seems), so I created a few creatures to get back into the swing of things around here (it has been a while for me).

by SmootRK
Bear (from the intro section on bears in the core rules)
Bears attack by rending opponents with their claws, dragging them in and biting them. A successful hit with both paws indicates a hug attack for additional damage (as given for each specific bear type). All bears are very tough to kill, and are able to move and attack for one round after losing all hit points.

Quill-Bears are covered with long spines like a porcupine. These ursine creatures are as massive as a typical brown bear, weighing more than 1,800 pounds and stand about 9 feet tall when they rear up on their hind legs. They are not as aggressive as other bears, probably due to the fact that few would even think to mess with one. Once roused, a Quill-Bear attacks like others in the bear family. One significant difference is that anyone that attacks one with a melee weapon will surely take 1d6 damage from the barb-like quills. ie. Porcursines

Cragodiles are akin to normal crocodiles but with a heavy stony hide. Unlike their more temperate to tropical relatives, cragodiles may be found in virtually any climate. Like a typical crocodile, one hunts the shallows and banks of waterways remaining submerged until prey comes within reach; surprising on 1-4 on 1d6. Because of a cragodile's exceptionally hard skin it takes half damage from piercing or edged weapon attacks. One significant difference is that a cragodile is signifcantly heavier than its normal kin and does not actually swim. The swim speed listed is actually more of a run speed along the bottom of a water way which one can navigate as easily as on dry land. Cragodile behavior is otherwise quite similar to a normal croc. 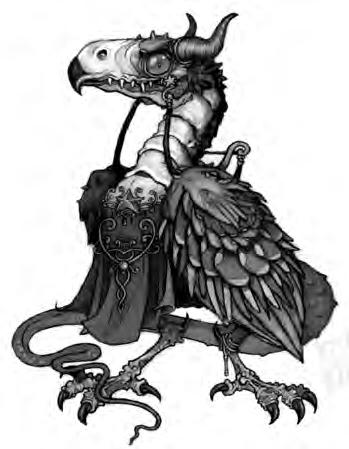 Like other elementals, magical weapons or spells are required to damage a Timber-Wolf. Consisting primarily of wood, one takes double damage from magical fire attacks, but takes normal damage from mundane or small fire attacks. Unlike standard elementals, there is a basic intelligence behind these behemoths, albeit in a state of rage. The exact catalyst that brings forth a Timber-Wolf is not known, but seems to follow a massive logging episode or similar devastation of a forested region. When one appears, it is primarily concerned with destroying or driving out that which threatens the forests. Over the ages, more than one settlement has been completely leveled by a Timber-Wolf.

A tymera is intelligent but exceptionally ill-tempered. It can speak dragon languages and may form pacts with other powerful creatures. There are rumors of a more benevolent variant with a silver dragon's head.

by SmootRK
OK, something new for this morning. I know there is at least one regular poster here that should love this one. One out of every five jotenkin will be a warrior of 5+5 hit dice and +2 damage bonus. Regular jotenkin gain a +1 bonus to their morale if such warriors are around to keep order. Each joten longboat will be led by a chieftain of 8+8 hit dice, having a +3 bonus to damage due to strength.
All times are UTC-05:00
Page 1 of 77