I believe this will be my last monster for the field guide, though I will slowly make art for mine (and perhaps others), as I would like them to all (or mostly) have art.

Also, could you make (or direct me to one if it already exists) a guide to the correct formatting of stat blocks in the field guide, particularity the 'Damage:' section as I have not found any mention of its formatting in the style guide.

A Battle Bear is a large black bear covered in silvery armoured plates, with a pair of halberds held by two additional stubby arms on its shoulders.

It attacks by charging at a foe to claw and hug them while defending against other attackers with its pair of polearms.

A patrol of 2d4 Battle Bears can occasionally be found patrolling areas of forest with a high bear population, as they act as guardians for other bear species.

A Battle Bear is a large bear covered with wiry black fur and with smooth, hardened plates of bone covering vital areas, with a pair of short spears held by two additional stubby arms on its shoulders.

It attacks by charging at a foe to skewer them on its spears before clawing and hugging much like other bears. The hardened plates on its head cause it to be unable to effectively bite in combat.

A patrol of 2d4 Battle Bears can occasionally be found patrolling areas of forest with a high bear population, as they act as guardians for other bear species.
Last edited by Fraetor on Sun Sep 17, 2017 2:03 am, edited 1 time in total.
Top

How about instead of armored plates, maybe thick hide or dinosaur-like plating with patchy fur sticking up between them? Also not sure about two long polearms, maybe shorter staves or spears? And for the attacks I would have it "2 claws/1 hug or 2 polearms" instead of all attacks at once, just seems a tad too much.

For the statblocks I can add something to the style guide in the future. The way you have it listed is partially correct (don't need the "+", just "/"; "+" is used with effects or poisons or such). I used to list attack names in the damage section, but I've come back around to how it's done in the Core Rules.

For everyone: less than 12 hours for any submissions!

Also, don't assume that anything posted in this thread will make it in as-is. As times goes by expect some heavy re-writing from many of us as we whip this thing into shape.

And since we have to mention this in every thread: there is NO release date, and NO expected date for this to get into print. We have other priorities first, and along with much re-writing we're gonna need WAYYYYY more artwork to get this thing comparable to FG1! If you ask I'm gonna delete your post at the very least.

The Owlwolf is a creature roughly the same size as a direwolf, with a pelt covered in feathers and a vicious curved beak lined with fangs. It's hind legs are very similar to that of a wolf but its forelegs are more like wings tipped with claws.

The Owlwolf is a nocturnal predator that hunts in a pack. Due to this it will normally attack almost any kind of creature taking advantage of superior numbers and the cover of darkness to wear down its prey before using claws and teeth to rip it to shreds. The creature will normally favour attacks from the rear.

The Owlwolf lacks true wings however it can, with great effort, achieve considerable height when jumping and even glide for limited amounts of time. Once every three rounds, as a free action, the Owlwolf can Leap a distance of up to 100' allowing it to move, attack and then leap away which makes it a very dangerous combatant in wide open spaces. when attempting to leap in partially obstructed areas such as forest or brush, the maximum distance is halved.

Owlwolves have almost perfect night vision and even in complete darkness, can see 200' ahead of them. When gliding they are completely silent.


(was inspired by this interpretation of the owlbear) 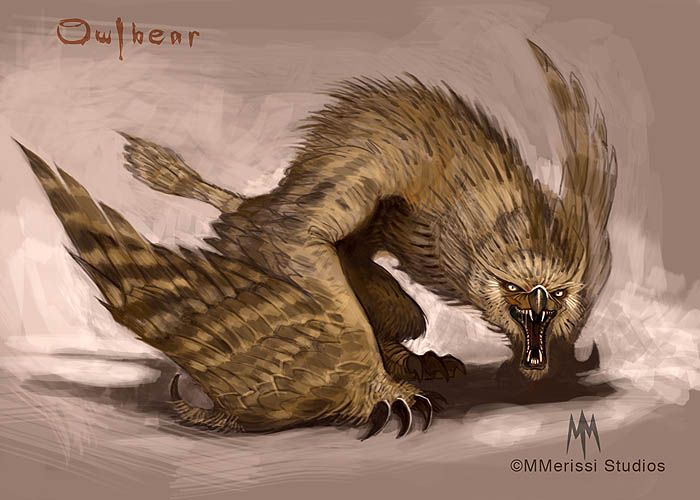 "If I have seen further it is by standing on the shoulders of Giants."
Top

Tall and slender, the Torok are a forest dwelling race of birdlike humanoids who are almost unnaturally agile. Their heads are shaped like long narrow triangles with a hooked beak at the end. They vary from 6 to 8 feet tall. Their skin comes in a variety of different hues ranging from bright red, to blue and yellow with small tufts of feathers on the elbows and the back of the head. They are intelligent and tend towards evil, preying on animals and humanoids alike, often not bothering to kill their prey once they have incapacitated them.

Torok group together in tribes, normally led by the strongest warrior of the tribe. One out of every four Toroks will be a warrior of three hit dice and will normally be wearing armour, they prefer pole arms, as a specific type unique to each warrior denotes states and will be engraved with various feats the warrior has achieved, but will use any weapon that comes to hand in an emergency. One in twenty Toroks Will be a Torok Chief of four hit dice, these normally wear more ornate armour dyed a separate colour to show status. In Torok Lairs of 50 or greater there will be a High Chieftain of seven hit dice, who wears plate armour with an AC of 19 and has a +2 bonus to damage. in addition, there is a 50% chance of a shaman being present who is equivalent to a warrior but has magic user abilities at level 1d4+3.

Toroks have a +2 bonus to initiative and are difficult to catch by surprise. Their tribal society revolves around an ingrained honour system and will never turn down a challenge to ritualistic combat.
"If I have seen further it is by standing on the shoulders of Giants."
Top

Wanstrows resemble tall and hideously mutated Orcs with a single eye. They vary greatly in colouration and may possess an unusual number of limbs, some having their lower half shaped like that of a snake, others having limbs replaced by strange bundles of prehensile tentacles that function similarly to a regular limb. Many will appear to have been partially melted with facial features being partially obscured underneath flaps of skin. They do all share a few features however. All have a set of three mandibles instead of a mouth, all have small sections of lung protruding from the skin that will inflate and deflate as the creature breathes and all possess only one eye.

Some believe that Wanstrows are the unfortunately fertile result of a failed magical experiment attempting to change orc physiology however none can say for sure. They seem to possess a base level of intelligence similar to that of a dog or wolf. Most Wanstrows exhibit signs of being in physical pain such as infrequent muscles spasms and constant loud screaming. They are highly aggressive and inhumanly strong.
"If I have seen further it is by standing on the shoulders of Giants."
Top

I'm afraid the monsters from Owlwolf on have missed Chi's deadline... unless he relents, we'll be starting a Field Guide 3 (!!!!) thread soon.
My personal site: www.gonnerman.org
Top

We will allow them

And those are the final submissions! I'll be working on the next release AFTER I finish working on BF3.
Top

R21 has been uploaded. I'd like to have a little more editing done before it's put on the Downloads page.
Top

Cleaned up some of the stat-blocks. Will do another quick read-through soon. If no-one finds anything else by the time I finish that, I'll send R22 to Solo to put on the Downloads page.
Top

About 1/3 through my read-through, a lot of little corrections. Also added Bruce's Tin Golem image. Should have next release ready by early next week.
Top
Post Reply
494 posts

Users browsing this forum: No registered users and 5 guests